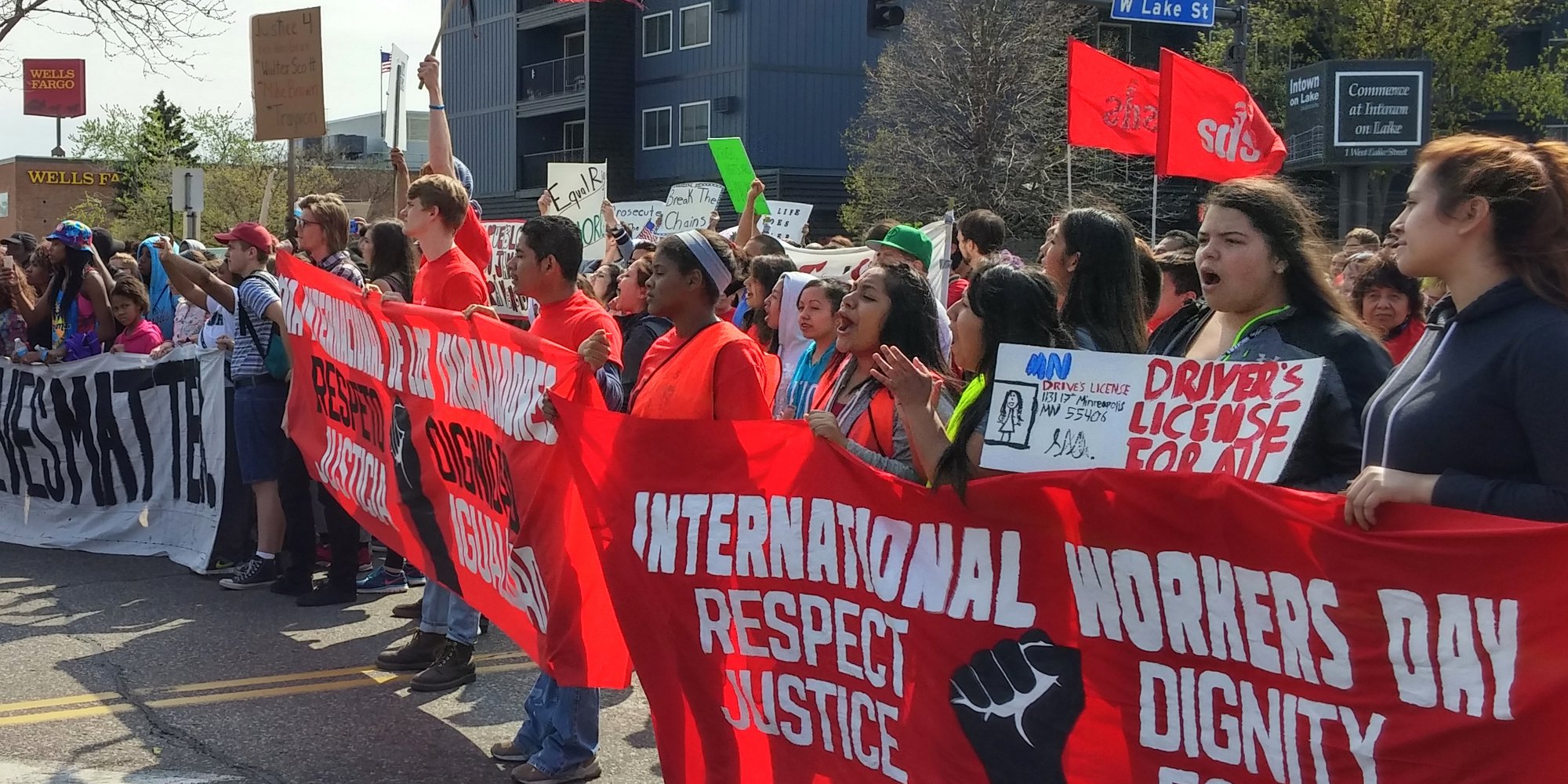 Society does not exist without workers.

I just want to say one basic thing, partly as an economist, partly as a human being. One of the tests of any economic system is the adequacy with which it provides food, clothing, and shelter — the three basic conditions for a livable life. In order to provide housing in a capitalist system, you either have to give people enough wages and income to afford it, or you have to bring down the price of the home or the housing so that they can afford it without raising their income. Either income or price has to be put in a position that housing is achieved. By that standard, US capitalism is failing. It is not providing adequate income to pay for the privately owned housing that is the way we organize that system. And that failure is a basic critique of US capitalism as I speak.

Since last May, we've seen a year of both gains and losses for workers, but overall many class-conscious movements are gaining momentum. There has been an increase in prominent organizing efforts from workers all over the globe, including several notable examples in the United States where union support has increased markedly relative to prior years. Change for the better happens over time through consistent effort and solidarity with our fellow comrades, and for this May Day we are taking the opportunity to highlight a few of those remarkable efforts.

Just a few months ago, Google workers announced their plans to organize with the Communications Workers of America. Their aim is to address pay disparity, retaliatory practices of Google leadership, and to continue opposition to murderous government contracts that violate the rights and privacy of people around the globe.

Their union will be open to all Alphabet employees, but also goes a step further by explicitly providing representation for individual contributors who are usually excluded from collective union bargaining efforts (such as contractors, who are the majority of the Google workforce).

Listen to some of these folx directly:

When Amazon workers in Alabama rallied to unionize, it was no surprise that Amazon bosses interfered with that democratic process through layoffs and threats to close the warehouse. The ballot box for collecting votes was forced to be placed in view of corporate controlled security cameras, while fliers with false information were planted in the breakrooms and restrooms, social media overrun with anti-union propaganda bots, and other illegal union-busting activities.

Consequently, Amazon won enough votes to defeat the union, but that doesn't mean the organizing was a lost cause, and the fight is not over. The election interference is being challenged at the National Labor Relations Board by the Retail, Wholesale, and Department Store Union.

We all await these results with great anticipation and solidarity.

Bessemer Opens the Floodgates: Amazon Workers All Over the Country Are Trying to Unionize

Just Due It: With Real Power (the main website of the unionization efforts!)

BAmazon Union (Why form a union at Amazon?)

Writing for the Tryst blog, Adrie Rose notes that there is a perception of sex workers as being apolitical, but that this is in fact a myth. As she puts it, "the unfortunate, and uncomfortable truth, is that there are no easy answers to the question of where political activism and awareness begin or where the pursuit of wealth for survival’s sake begins."

Our very existence is legislated, moralized, and debated almost entirely by people who don’t know the first thing about us or our lives. There is no such thing as an apolitical sex worker. It’s contradictory and inherently antithetical.

For many sex workers - especially those who are not white-passing - appearing apolitical is a survival technique in a world where harmful legislation like FOSTA/SESTA is a reality, where sex work is not afforded legal protection or equal rights as a valid form of work, and where constant threats of violence from the police and public are a unfortunate reality for many sex workers.

Recently we've seen an increase in sex worker organization and activism. Here are but a few examples that we love:

Uber and Lyft not only extract monetarily from the cities in which they operate, but they also do nothing to protect and provide for the workers who do the work. It can COST someone money to drive for these services, placing their hourly wage far below minimum, while their technocratic "leadership" holds $1.4 billion in stock.

The exploitation of "disruptive" apps on industries we all rely upon usually don't bring balance and equality for the workers who put in the hours to help us all get around. A cooperative allows these drivers to share in the profits they collectively earn, and provide for their basic employment rights as they do so.

The Drivers Cooperative met their public fundraising goal within 24 hours of posting it, and wasted no time in getting their technology ready for public use. Their apps are already available on iOS and Google for use in NYC: https://www.drivers.coop/

Go ALL OUT for May Day

cover image: "May Day rally for immigrant and workers' rights," Fibonacci Blue from Minnesota, USA, CC BY 2.0, via Wikimedia Commons